Skip to content
Q&A: A Sampling
“Do all deaf people benefit from hearing aids?”

A: No. It depends on the Deaf person’s hearing level, and other factors. Some people who are severely or profoundly deaf like to wear aids to give them more environmental awareness, even though they may not be able to participate in a spoken conversation. Others who are equally deaf don’t wear aids at all, since they don’t derive much benefit from them, don’t feel comfortable, or simply don’t want to bother with them. Deaf people can function quite nicely without aids. It’s a matter of personal preference.

A: No. Although the term “deaf-mute” still persists in the U.S. and English press (which still uses “deaf and dumb”), neither of these terms should be used. “Deaf-and-dumb” and “deaf-mute” were at one time non-pejorative terms for deaf people. They reflected a common misconception that deafness caused muteness. People believed that deaf people couldn’t speak, that they were incapable of speech. Even deaf people used these terms to describe themselves. With the evolution of the Deaf community and changing perceptions, these terms are now considered obsolete and offensive. They have acquired a derogatory connotation. “Mute” is now used to describe a person who cannot talk; “dumb” is now used to mean clumsy, stupid, or ignorant. Even the term “hearing-impaired” is now perceived as an insult (or simply bad usage), since it’s a vague euphemism. So please do not use “hearing-impaired.” Use the simple, non-judgmental term “Deaf,” or “Deaf and hard-of-hearing.”

“Do you have a problem with hearing performers playing Deaf roles?”

A: In the early days of Hollywood, Deaf roles were invariably played by hearing performers. Many of these characterizations were stereotyped (and would be considered offensive nowadays). Deaf actors and actresses began breaking into TV and film during during the 1970s, scoring important advances—e.g., returning characters, lead characters, getting ASL-speaking Deaf performers in background roles. With these advances have come a demand for authenticity. A hearing performer who takes a Deaf role (typically with a crash course in ASL and Deaf mannerisms) is rarely convincing. Every Deaf role given to a hearing performer represents a lost opportunity. We believe that Deaf performers should be cast in Deaf roles.

“What is Total Communication?”

A: It’s an educational philosophy that encourages teachers to use whatever methods of communication are best for deaf children, including sign language, speech, writing, or a combination of methods. TC was popularized by the much-loved Deaf teacher and administrator Roy Kay Holcomb in 1968, and since it recognized the value of signing in the classroom, represented a radical break from the rigid oral/aural approach that had dominated deaf education for nearly a century. There is considerable controversy as to what TC is and isn’t, and how well it’s been working. It is commonly, but erroneously used to designate “Simultaneous Communication” (SimCom)–signing and speaking together. SimCom can be part of TC, but the two are not synonymous.

“How do Deaf people feel when a hearing person approaches them in public using sign language?”

A: It depends on the situation and the environment. Some Deaf people appreciate it when a hearing, signing stranger approaches them; others resent it. Deaf people queuing up in a bank line may be preoccupied, busy, or in a hurry as they wait for the teller. But if they’re on a bus or train, or in a waiting room, it may be okay to strike up a conversation. Say, “Hello, how are you?” and let the Deaf person take it from there. Don’t offer to “help” or interpret for the Deaf person–unless such help is really needed.

A: No more so than there is one spoken language for all countries! There are hundreds of known sign languages, with regional dialects, and new national sign languages are being created (as is happening in Nicaragua). American Sign Language is used throughout the United States and Canada (which also has LSQ, the sign language of Québec). Although ASL possesses numerous regional variants, a signer from California can easily understand one from New England. Similar signs can have vastly different meanings in different sign languages. What is a perfectly polite sign in one language may be an obscenity in another. International Sign Language” is used at international conferences. “Gestuno,” a signed version of Esperanto, was developed in the mid-1970s by a World Federation of the Deaf committee, so it’s really not a language; the term “Gestuno” has fallen out of favor. It’s a very simple, logical, universal system of signs, used to convey greetings and instructions, that is immediately understood by all signers, whatever their native language.
Participants at the Deaflympics and other international events who use different sign languages quickly find ways to establish communication with each other. They “invent” their own “international sign language” as they go along.

“If I take one or two sign-language classes, will that make me a qualified interpreter?”

A: Hardly. But you’d be surprised how many people have little—or no—idea of just what it does take to make a qualified interpreter. Anyone can call himself or herself a “qualified interpreter.” It’s not illegal to do so, but it’s certainly not ethical. There are two national certifying bodies for professional interpreters: the National Association of the Deaf and the Registry of Interpreters for the Deaf, which currently maintain their own separate certification standards. They are working towards a “merger.” Some interpreters possess both RID and NAD certification, others one kind, and still others, who may be good interpreters, neither. Some states still don’t recognize or require NAD or RID certification, which makes matters more complicated. To some extent, it’s up to the client to make sure that the interpreter is qualified. And the Deaf community is grappling with the issue of reliable statewide certifications and licensing.

to read full chapters,
purchase one or more copies! 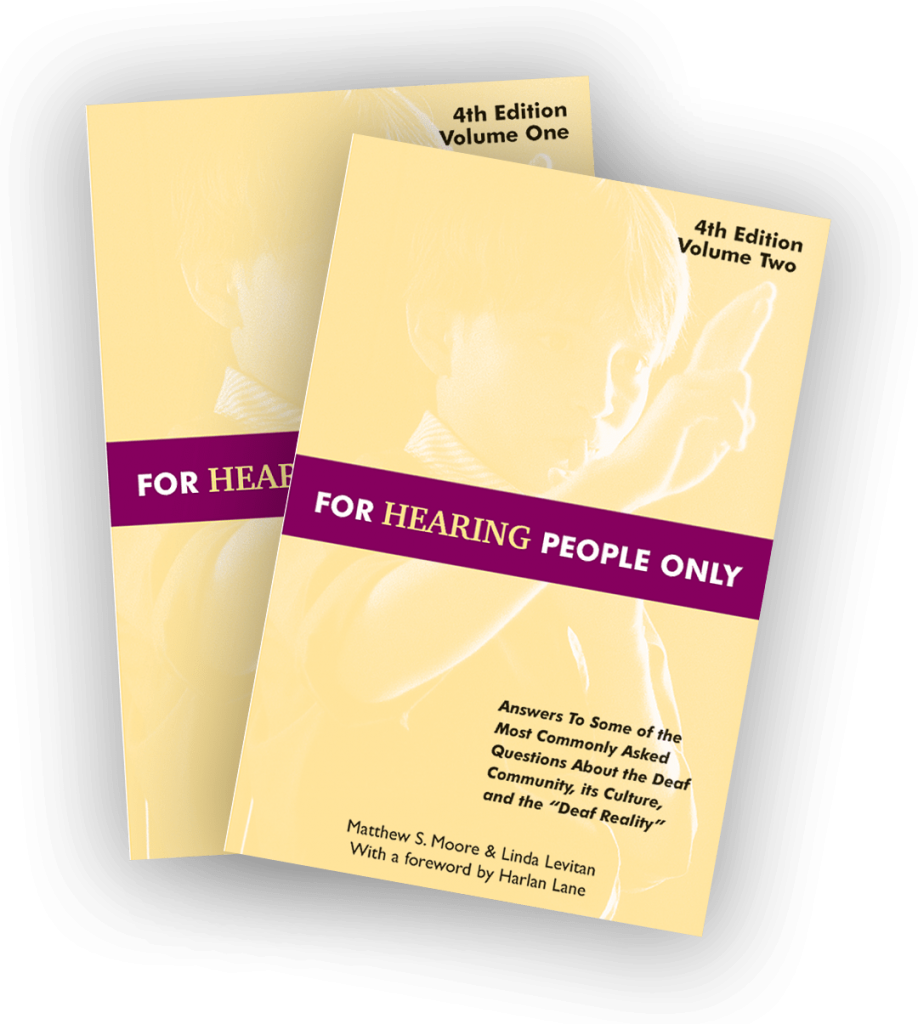 You can order this exciting book
at Deaf Store.

Do you need wholesale order for educational purposes?
It requires you to register a wholesaler account so you become eligible to order the wholesale products